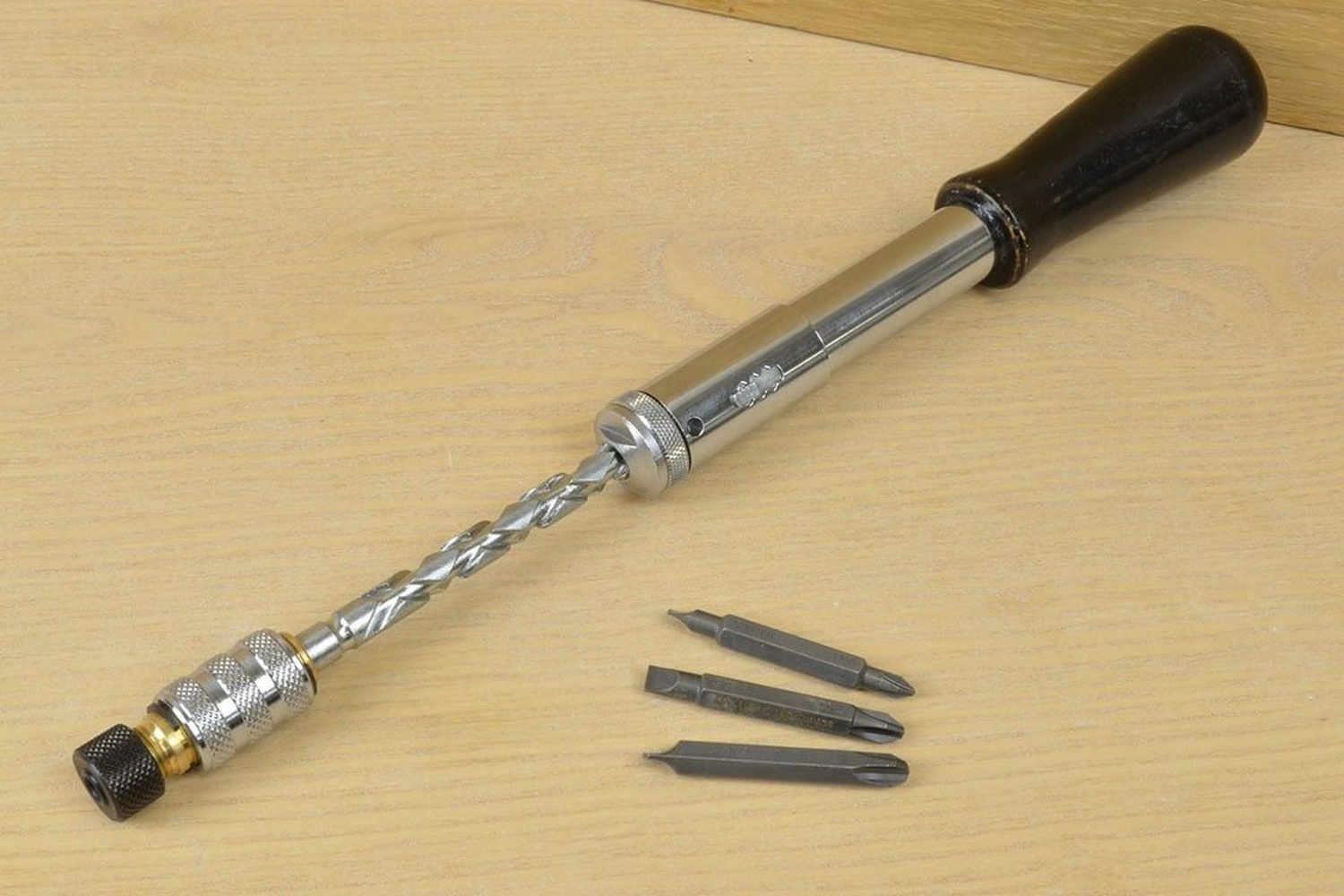 If there’s one “classic” woodworking hand tool that deserves a spot in every modern toolbox, it’s a Yankee screwdriver.

These handy screwdrivers spin when you push, alleviating the need to twist your wrist. Not even ratchet-style screwdrivers offer that level of comfort!

I’ve been using them for years, so to help spread the word and get more people on board I put together this list of the best Yankee screwdrivers you can buy today.

Check out the full guide, or just nab one of the quick picks linked below. They won’t let you down.

What is a Yankee screwdriver?

Before we get into the list, it’s worth going over a quick definition of what a Yankee screwdriver actually is.

A Yankee screwdriver is a spiral ratchet screwdriver that first came to the market around 1900. “Yankee” is actually a brand name from North Brothers Manufacturing Company, which was later purchased by Stanley.

Later models improved the basic design with a spring-loaded mechanism that extends the chuck automatically. This means that all you need to do is push —and the tool will do the rest!

Stanley stopped production of “Yankee” brand screwdrivers nearly 15 years ago, but several other manufacturers have since stepped up to bring back the design.

This article is about newer models that you can still purchase, but I’ve included a few resources for antique Yankee screwdrivers later in the article. Still, I wouldn’t recommend getting an antique model unless you’re an enthusiast.

Do I really need one?

Power drills can largely fill the same niche as a Yankee screwdriver, but I think it still warrants a purchase for modern woodworkers.

Well, for starters it takes up a much smaller footprint in your toolbox. When retracted, they’re roughly the same size as a large screwdriver.

And compared to manual screwdrivers, these spiral-ratchet models are much easier on your wrists.

They even have a few advantages over power drills. You have much more control over pressure, so there’s less risk of stripping your screws.

If you’re looking to buy a new Yankee screwdriver in 2022, you can’t do better than this option from Kings County Tools.

It’s a fairly compact model that will fit in most toolboxes, but it includes seven double-sided hex bits that store neatly in the clear plastic handle.

However, since the chuck is deeper to accommodate the two-sided bits, standard bits with a short shank will sink a bit too deep to be useable. Longer shank bits will work perfectly.

Without a doubt, this is the modern Yankee screwdriver to get for most people. It also happens to be one of the most affordable, running less than $20.

Yankee screwdrivers can do far more than just turn screws, as demonstrated by this push drill model from the same manufacturer as above, Kings County Tools.

Made in the same style as older Craftsman models, it uses the same half-shank drill bits as the Yankee screwdrivers of old. That means you can get perfect pilot holes in delicate pieces without the sound and annoyance of power tools.

If you already have a Craftsman or Stanley model like the No. 41Y, Kings County Tools also sells replacement bits that fit most classic models.

This next model stays away from the trademark “Yankee” screwdriver brand, but it delivers the same performance at a great price.

Compared to the two models above, the plastic handle is a bit less comfortable, and the shaft may require lubrication to keep it from jamming up.

Still, it’s a fantastic little tool that’s an absolute pleasure to use.

The German brand Schroeder purchased the “Yankee” trademark from Stanley in the early 2000s and continued production using the same designs. This particular model is slightly adapted from the Stanley 135.

There are two types of chucks available, one that uses the old half-shank bits and one that uses standard 1/4″ hex bits. Both are manufactured in Germany to a high standard.

However, these models are difficult to get your hands on, and run quite a bit more expensive than other alternatives. Still, this is the highest-quality Yankee screwdriver you can buy without restoring an antique model.

Last up is a Yankee-style screwdriver from the budget brand Silverline. As such, you shouldn’t expect the same quality as the old Stanleys, but they can certainly get the job done.

If you’re having trouble finding the other models, this one may be more readily available. That said, it will be noticeably less smooth in operation, which may be frustrating for those looking to replace the models they used years ago.

The history of Yankee screwdrivers

The earliest Yankee screwdrivers to gain popularity were made by the small family business North Brothers Manufacturing Company starting around 1898.

The company purchased Forest City Screwdriver Co a year earlier, which brought with it an inventor from Maine named Zachary T. Furbish. Zachary obtained a patent for what would later become “Yankee” brand screwdrivers in 1895.

North Bros continued to refine the design over the years. In 1946, Stanley Works purchased the company and continued to use the “Yankee” brand until the early 2000s, when it sold the brand to the German company Schroeder.

For more on the history of Yankee screwdrivers, check out this excellent post by the Valley Woodworker.

If you’ve ever used an older model Yankee screwdriver, you know that the bits are wildly different from modern hex bits.

Yankee screwdriver bits have a half-cutout at the base of the bit which fits into a slot in the chuck. A small notch further up keeps the bit from falling out.

This gives it far more torque and control than standard hex bits. The main downside was that they weren’t universal, so you had to have the right size bit for your specific model.

Today, these bits are somewhat hard to get your hands on. If you have an antique Yankee screwdriver, you can get new bits here, or opt for an adapter like this one that lets you use any modern hex bit.

That’s it for this guide to the Yankee screwdriver! Did you find a model to add to your toolbox? Let everyone know in the comments below!

What is Domestika? Is it worth it? Mini review and more