Today we’re talking to legendary papercrafter Ninjatoes. Despite remaining anonymous online, he has inspired countless papercrafters over the past few decades, including yours truly! His models were some of the first I ever made, and remain some of my favorites to this day.

Primarily drawing on classic video games, he has released more than 220 original model templates for free on his website. He also posts works in progress and papercraft recommendations on his blog.

Without further ado, let’s get to the interview!

Tell us about yourself. What do you make?

Using my online alias Ninjatoes, I’m a papercrafter. In my case, that means I make 3D objects out of 2D paper pieces. Nowadays I make the templates to do so myself, from video games or science fiction movies, or anything I like really. Mostly from the 1990s or early 2000s, since that was when I was most into gaming and stuff like that.

There are some video game series that I keep coming back to, like Tomb Raider, The Legend of Zelda, Final Fantasy, Advance Wars… but also TV series and movies like Star Trek and Star Wars, or LEGO minifigures and lots more!

I love playing the classic, “blocky” Tomb Raider games for example, and at some point, I started making papercraft “vignettes” that show little scenes from the games. I really like how that turned out as a whole, matching series!

What do you consider your best or favorite piece so far?

I really couldn’t tell you which papercraft is my absolute favorite, though! To be honest, it changes all the time.

I really like Lulu, the Black Mage from Final Fantasy X: making a papercraft like her is usually a bit more complicated with the polygon-based unfolding program Pepakura Designer that I use.

Despite that, I really like how smooth the shapes turned out, and how nice the simple 2D belts on her dress and her hair and all the other pieces ended up looking together.

But I especially like how well the papercraft went together in the end: her shoulders and chest for example just kind of nestle on the fur part of her dress to give it its correct final shape, and then just kind of drop over the top of the dress. It is usually a tricky step in assembling a papercraft character, but worked out really well in Lulu’s case!

Tell us about your workspace

Most of my papercrafts nowadays start off on my computer. It’s in a 2m by 3.5m (about 6.7 feet by 11.6 feet) part of the attic landing at the top of my stairs. I added LED battens for better lighting which made a HUGE difference!

The computer and printers are on one “desk” (which is actually just a large plank on wall-mounted brackets). I even have my old 32-bit Windows XP computer there if I need it, although it’s not hooked up at the moment.

On the other side, there’s a small desk with different kinds of paper supplies and things. My games and old LEGO are stored in the little space too, along with other random storage and things like that.

The actual papercrafting I do at another old desk in the house, which is partially full of Pringles cans (that now hold color markers, pencils, and other tools instead of potato crisps, though…) and “important” papers and other things.

The leftover workspace is about 42cm by 59.4cm (about 16.5 inches by 23.4 inches), and I know that because it’s roughly the size of a standard A2 size paper desk pad (the “current” one has a calendar of 2010 on the backside so maybe I should get a new one soon).

But you really don’t need a lot of space to make papercrafts anyway! Only if you want to keep them somewhere when they’re finished…

I usually try to make my papercrafts at a manageable size, so I can put most of them on a couple of really simple shelves that I made in the computer area for that purpose. Those are pretty much filled though, and older paper models or ones that are too big are in cardboard boxes.

Tell us about your process. What’s your favorite tool or software to work with?

Sometimes I just use a paper and a pencil to create the parts from scratch as I go along. It’s pretty much how I started and it’s the most fun for a papercrafter: to just have an idea, take a piece of paper and start!

Nowadays though, by far most of my papercrafts will be from video games and I like to try and make them look as if they jumped right from your computer screen onto your desk.

I try to use the real game models as base reference. Luckily, I happen to like older games that often have a large and active fanbase. If you’re lucky, you can find the tools to extract the actual 3D models from the actual game on fan forums or fan sites to start with.

To be honest though, game models almost never make good papercraft models from the start.

I use a 3D software called Metasequoia to edit them. It’s a relatively simple 3D modeling tool, and the free version does all the basic things that I need (and a lot more to be honest!).

Sometimes I just have to fix a few things and other times I end up recreating an almost entirely new 3D model that will be better suited for papercrafting on top of the one from the game.

Once that part is done, I take the 3D model from Metasequoia into Pepakura Designer, which is the actual unfolding software. It takes the polygons from the 3D model and moves them all onto flat sheets, all connected and in their “true” size and shape. That’s why it works so well with the games from the time period I like, because those usually have that early, “blocky” polygonal 3D style!

When I’m happy with the results, I export the final unfold from Pepakura Designer as a regular image file. From that I create the actual papercraft templates in Photoshop: I copy the parts on the individual sheets in way that “makes sense” (to me at least), add the part numbers (that’s the order in which I think it’s best to assemble the papercraft myself) and usually I do some finishing touches (like fixing a texture or parts that I couldn’t fix correctly on the 3D model).

And then I build the final papercraft myself!

Ever since I started sharing my own papercrafts online, I wanted to add instructions, and the easiest way for me is to take step-by-step pictures of this final build process and add a bit of descriptive text. So that’s another extra step I ended up doing over the years, but I like seeing “build pictures” of papercrafts anyway and it has become a bit of a distraction from other things for me haha.

I actually do have a Silhouette Cameo 4 cutting machine, which I bought specifically for my LEGO Vacation Hideaway set papercraft. That one has so many repetitive cuts that I think I still would have been working on it now otherwise…

Normally though, my papercrafts are just “one offs” and I just use a sharp X-Acto knife with a rubber cutting mat (that is a bit worn, but still works!) to cut out the parts.

It’s been more than 20 years since you uploaded your first model! What inspired you to get started and how did you learn?

I started like most people, I think: by building other people’s papercrafts. I think some of my first ones were some of the Star Wars papercrafts from Shunichi Makino at his SF Paper Craft Gallery.

Or maybe it was the movable R2-2D from Cut ‘n’ Paste scifi’s website. That one I couldn’t find anymore unfortunately, except on an archived version of their website (the downloads for R2-D2 still seem to work, though!).

Back then, I couldn’t really find any papercrafts from the Star Trek series Voyager or Deep Space Nine that I really liked. So I decided to try making my own by just drawing the pieces by hand and continuously testing whether they fitted as I went along.

To color them, I used color markers or watercolors. In the end, I asked my parents for a scanner so that I could scan the parts to share them online. I had loads of fun that way!

Later I discovered the Pepakura Designer program and how you could use it to unfold the video game characters from the video games that I liked. Another whole new world opened for me!

I’m not sure papercraft is really something you have to learn: I think everybody can cut out pieces of paper and glue them together.

If you want to start using computer tools you may need to familiarize yourself with some specific programs. If you just stick with what you really “need” for papercraft, it isn’t necessarily very difficult though, and it’s easy enough to learn just by DOING.

Playing around with the tools to figure out what everything does is probably the fastest way to see what works for you! Like everything, it does take some time though!

Any advice for beginners?

With things like papercraft, I find that the result usually matches the amount of time and care that you put into it. And the more you do something, the better you get at it!

So don’t worry if you get frustrated sometimes: just save it until later.

Who/what inspires you today? Any shoutouts to fellow makers/papercrafters?

To be honest, it’s really all the people that create and all those awesome (video game) characters and stories that make me want to make more new papercrafts than I ever will be able to!

As for specific papercrafters, there are so many of them that sharing their hobby and their works with everybody. I love seeing that, and I hope everybody continues doing so!

One square sheet of paper with no cuts is all Juho Könkkölä uses to create these incredible figures.

Playful and colorful shapes leap out of Eliott’s work and onto the walls of their workspace, providing constant inspiration.

Sharing a small home office hasn’t stopped Alex from getting creative with her fun and colorful printable paper toys.

Best yarn winders you can buy (and why you need one)

Udemy vs Skillshare: Which platform is right for you?

What is Udemy? Is it worth it? A comprehensive guide 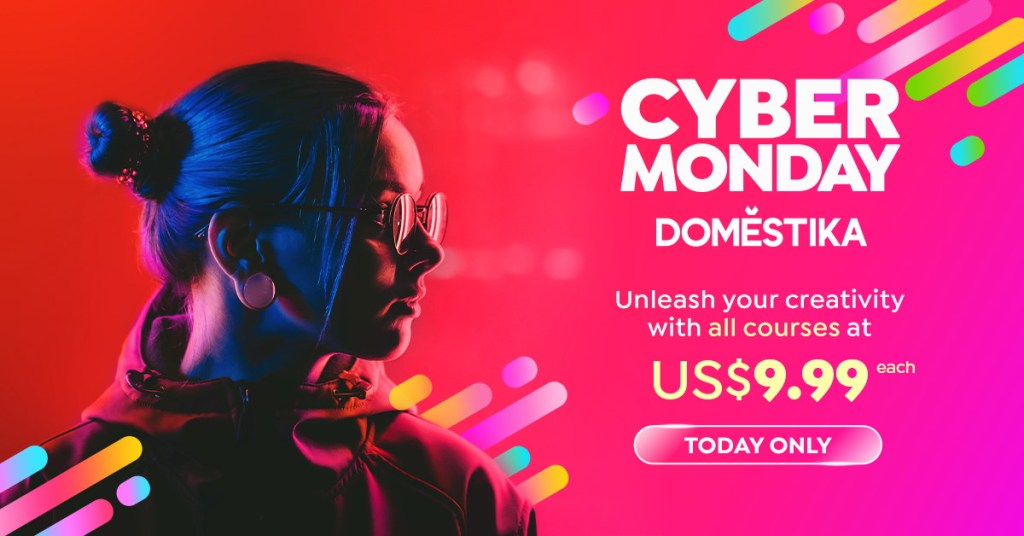 All creative courses on Domestika are currently $9.99, a discount of more than 75%!

The event only lasts until the end of the day, so don’t delay!